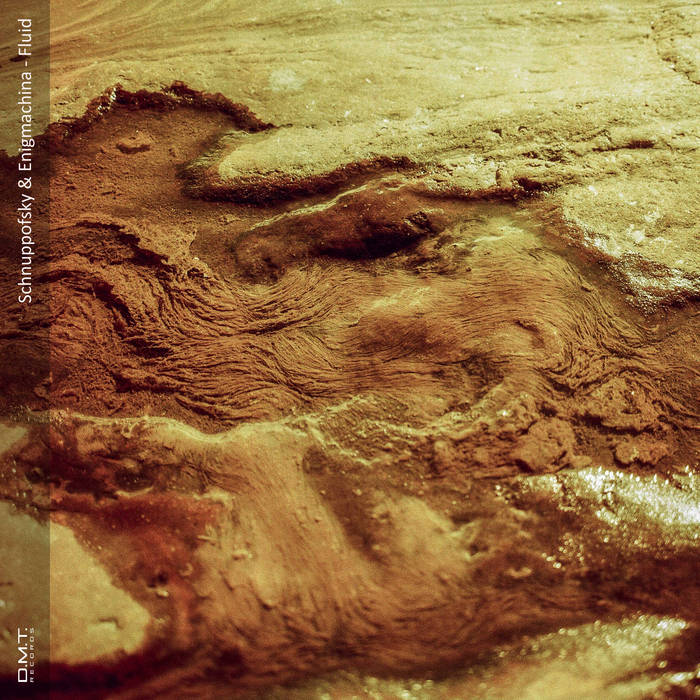 Enigmachina and Schnuppofsky about their Collaborative EP Fluid
Fluid is a collaborative EP between Montreal-based ambient producer Lisa Teichmann aka Schnuppofsky and the experimental project of Alban Rumpf aka Enigmachina, who is based in Germany. With 3 tracks, the EP features each a solo piece as introduction and outroduction for the central collaborative composition “Fluid”, in which both artists merged, reworked, arranged their sounds into one stream of textures. Here Alban and Lisa say more about how they worked on the EP and how a collaborative project like Fluid takes shape.

How did this collaboration come together and what is ‘Fluid’ about?

Working together on this release started very spontaneously, also we had no real intention about the outcome or if it should mean anything.

Looking at the release now, you could say that ‘Fluid’ is a channeling of the ongoing change and diversity of patterns that we can experience in life, and also the mergence of those. From feeling at home to out of the comfort zone, there are familiar progressions, artefacts and rhythms… and more often unpredictable happenings, that confront us with something new, which we struggle to connect with at first.

By this absence of a typical build up and structure within the tracks, listeners might be challenged to let themselves go and accept whatever new environment they are thrown into.
So ‘Fluid’ stands for the feeling transported by the tracks, but also the flow of the creative process.
That being said, there is no fixed meaning or point to this music, besides an honest expression of what we felt while creating it.

How did the project take shape?

Actually it didn’t start as an EP, but with the track ‘Fluid’ which is now the middle piece of the release. One day we sent each other some sounds and a simple structure of sounds from instrument and field recordings. 8 hours and many file transfers later our track Fluid had taken shape.

We both really liked the mood of it and as it came towards finish, it just felt right to keep the process going and let this thing evolve further. Fluid contains both our sounds and signature in arrangement. Flow took us into the making of a more calm mood for the introduction, fitting to Lisa’s approach, and vice versa for the Outro. So those two pieces were created working in each of our solo projects. This way, the EP contains a mix of our styles while also providing space for both worlds to be heard on their own.

How would you describe the process of working on a collaborative release?

It was definitely a unique feeling of collaboration, especially considering that we live in different parts of the world. Diving into a very fast and intuitive process of sending the project file back and forth, making parts and adjustments here and there was lots of fun.
An intriguing aspect was that we didn’t discuss any specifics of the production process while creating the track. Opening up the new version was always accompanied a feeling of surprise, like receiving a cryptic message from the other person and adding your next layer of code to it before sending it back. Using sound as a tool for communication was a big part of this work.

Anything else to put out there?

Special thanks go to Colin Lloyd for Trombone recordings used for production, as well as to Daniel for all the work he put into the mastering to make it fulfill our vision! Special thanks go to Kamielle for the wonderful artwork in which we can see our send reflected.

Grateful to have had that experience.
Grateful for a space to share it.
Grateful.

About Enigmachina: Enigmachina is the experimental project of Alban Rumpf. Reaching from Ambient/drones/glitch and trance to high bpm psychedelic core, it could be described as a genre fluid project which merges and dissolves those different influences to explore new and unusual sonic environments. Those are not created for a certain purpose but merely for the sake of their own existence and the process of experimentation within this ongoing arcanum we call life.

Enigmachina is part of Minuteless recordings, where releases will be more of the peculiar and weird kind.

An EP residing in the upper bpm range of the project is soon to be released on ‘Painted Chaos Project‘.

About Schnuppofsky: Schnuppofsky is the (dark) Ambient project of Lisa Teichmann, who is originally from Austria, but currently based in Montreal, Canada.

Her artistic practice consists of playing and recording instruments, then synthesizing these audio tracks into pads and improvising/composing. The recent compositions have been strongly influenced by rare instruments such as overtone harps, which she had the chance to record a private collection of custom made harps this winter in Austria.

She has released the single, „Delayed“ and “Underwasser” and has been working with Canadian filmmaker and visual artist Rosalie Bordeleau. In addition she also performs and creates as virgo, a collaborative project with Sammy Halimi and is a host on LoSignal Radio (CKUT 90.3 FM).

Stay tuned and keep it dark, minimalistic and technologic!

Special thanks go to Colin Lloyd for Trombone recordings used for production, as well as to Daniel for all the work he put into the mastering to make it fulfill our vision!